Why does a chiral carbon affect some hydrogen's hydrogen environment? 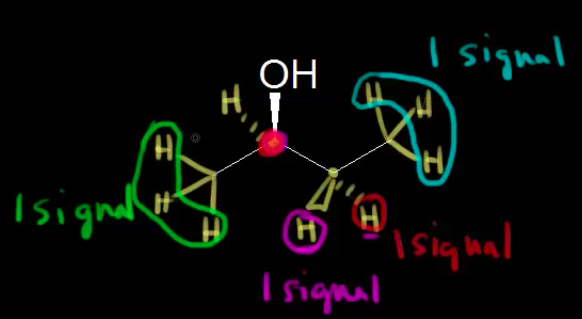 There is a big difference between the two hydrogens and the hydrogens in the two methyl groups.

The issue is that the methyl hydrogens are part of a group that can rotate quickly and so they see an averaged environment which is the same for all the hydrogens. If the bonds were "stuck" and the methyl groups could not rotate your argument might be correct, but the is not the case.

The two hydrogens on the carbon next to the chiral centre are also connected to bonds that can rotate. But they never see the same environment even on average because they will always have a different relationship to the hydrogen and hydroxyl on the next carbon. Whatever way you rotate the bond connecting their carbon, the two hydrogens will be in a different environment, so they appear with distinct shifts.

Not the answer you're looking for? Browse other questions tagged organic-chemistry nmr-spectroscopy chirality or ask your own question.

5
Pseudochirality with more than two groups on one carbon atom
5
Are the hydrogen atoms of 2-methylindane homotopic, enantiotopic, diastereotopic or unrelated?
1
Why was the definition of chiral carbon changed?
7
Enantiotopic hydrogens in cyclopropanone
14
Does a chiral centre have to have 3 or 4 different groups attached?
4
Chiral carbon in carvone molecules