What is the best hydrogen bond acceptor in 2-amino-N-(3-hydroxyphenyl)acetamide?

I was preparing for my first exam in organic chemistry and came across this question. 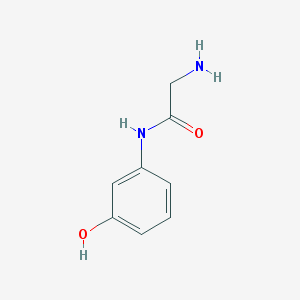 I was thinking that it would be one of the oxygens, because of its greater electronegativity compared to nitrogen. However, I'm having a little trouble distinguishing which oxygen.

I'm leaning towards the alcohol group. My reasoning is that there is less steric hindrance preventing solvation, but I am not sure.

As a general rule of thumb, a nitrogen is usually a better hydrogen bond acceptor than an oxygen. There is a brief overview on Wikipedia with a couple of values and where they were derived from.

In your example, 2-amino-N-(3-hydroxyphenyl)acetamide, there are three functional groups (or four if you want to count the aromatic ring, too): a primary amine, a secondary amide, and a phenolic alcohol.

The phenolic alcohol is rather acidic and not such a good hydrogen bond acceptor, as some of the lone pairs are in conjugation with the aromatic ring.
The amide is also a delocalised system, which makes the nitrogen pretty unavailable for hydrogen bonding. For this functional group, if it were separate, the π-orbital would be the HOMO, and this is where the protonation/ proton-accepting will happen; due to the delocalisation this is less so the case. An amide usually is not a good hydrogen-bond acceptor.
The amine is primary, which means there is much space around it and it can directly interact with the solvent. This is a good hydrogen-bond acceptor.

Therefore neither oxygen will be the best hydrogen-bond acceptor.