Where does the characteristic peak for phtalic acid diethyl ester at m/z 149 originate?

Which fragmentation is possible at this m/z value for phthalic acid diethyl ester?

I tried McLafferty but it didn't solve my problem.

In the figure below is a proposal for the mechanism leading to the formation of two possible structures for the $m/z$ 149 ion.

If one consider that is fragments as do benzoate esters, through radical induced $\alpha$-bond cleavage leading to the loss of $\ce{CH3CH2O^.}$ followed by standard decarbonylation of the acylium ion. For phtalate esters, the question at this point is whether the structure will remain as I or might undergo isomerisation to more stable structures. 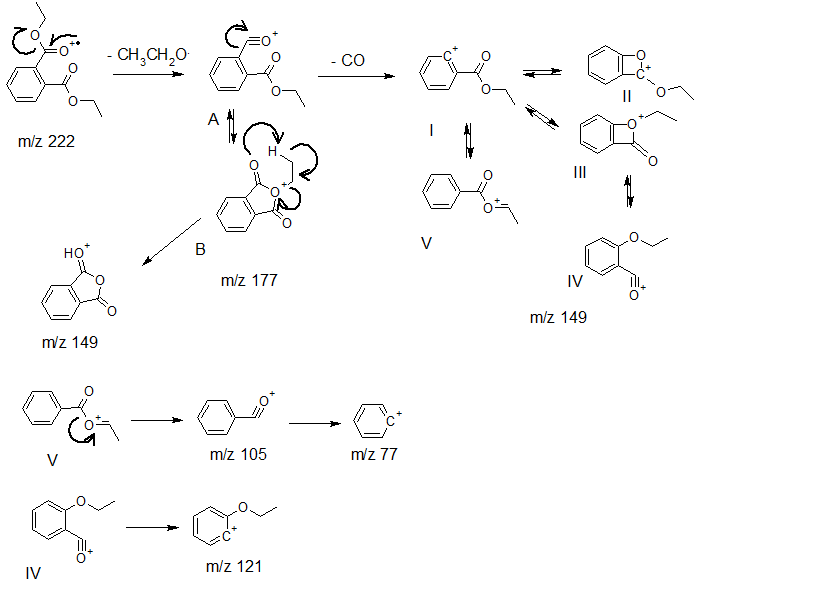 I have provided a few alternative structures: simple addition of the neighbouring carbonyl would lead to structure II which although it has some constraints, allows a good stabilization of the positive charge both in the ester and by the aromatic ring. Other structures can be postulated, such as III after addition of the ethanoyl oxygen to the aromatic cycle. This four membered ring can reopen to lead to the acylium structure IV which can in turn undergo decarbonylation to form the ion $m/z$ 121, also present in the spectrum. So there is some indirect evidence that these structures might be involved in the fragmentation process.

Finally, in order to explain the formation of ions at $m/z$ 105 and 77, one can also propose a last isomer for ion $m/z$ 149, structure V, formed after 1,5 hydride transfer. This one can quite easily lead to loss of acetaldehyde, eventually followed by decarbonylation to lead to ion $m/z$ 77.

If phtalates present specific reactivity, the other option is that ion A at $m/z$ 177 can cyclize to structure B which is a very good candidate for ethene loss leading also to an ion at $m/z$ 149.

The question then becomes which of these two $m/z$ 149 is the actual ion. These two isobaric ions could be resolved by high resolution experiments, but after looking in publicly available databases, I did not find any high resolution spectra. Deuterium labelling of the ethyl groups could also prove handy, but once again I did not find any spectra of diethylphtalate labelled on the ethyl groups. (The usual diethylphtalate used in quantitation experiments seems to be the $d_{4}$ isotopomer, with deuterium on the aromatic ring.) Finally one can also have a look at isomers and related ions to see how they fragment. And indeed if one takes the dipropylphtalate ester, the ion at $m/z$ 149 is present (produced after propanoyl loss followed by propene loss) and there is no strong ion at $m/z 163$ which would tend to be a good indication of ethene loss for diethylphtalate. But, on the other hand, both the meta and para isomers of diethylphtalate have a much weaker ion at $m/z$ 149, which cannot be accounted so easily by an equivalent to intermediate B. So I would probably favor the concurrent occurence of both pathways, with a ratio that still needs to be measured.

In addition to the answer above, it should have been quite immediate that a McLafferty rearrangement was not an option: since there are no nitrogen, the nitrogen rule allows to conclude directly that the odd mass of the ion at m/z 149 indicates that it is an even electron cation, as opposed to radical cations produced by McLafferty rearrangements.

the fact that dimethyl phthalate does not produce significant amounts of the 149 m/z fragment, but all other phthalates with a longer alkane chain do, would put decarbonylation in favour, leading to fragments I - V from above scheme.

3
Fragmentations and rearrangements in n-(4-alkyl phenyl) alkanoic acids in mass spectrometry
2
The amount of citric acid for golden syrup
1
What is the correct name for 2,4-diethyl-4-ethoxyhexane?
0
Formation of (Gamma) Methylparaconic acid
5
Difference between HCD and CID collision induced dissociations?
0
Cause of m/z = 56 peak in 4-methyl-1-pentanol
2
Retrosynthesis of spirocyclic compounds?
10
What is the name origin of ester?