Interpreting straight lines in a graph of isotherms of carbon dioxide

I am having difficulty in understanding pressure-volume graphs of $\ce{CO2}$ at different temperatures which describes liquefaction of $\ce{CO2}$. 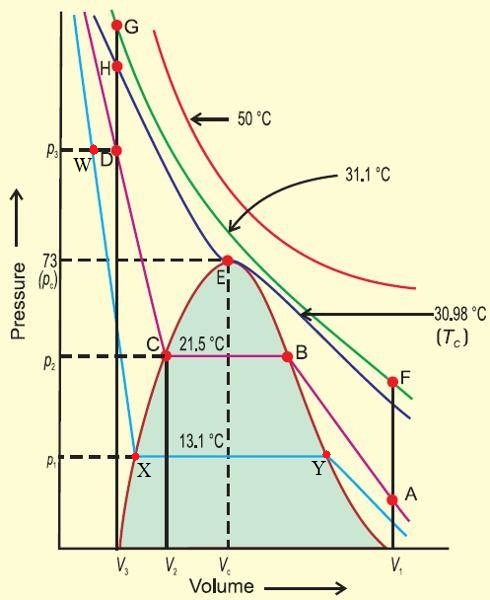 But I am having difficulty in understanding some statements about the graph.

I know that if we are compressing a gas its pressure should increase but why its pressure is constant along the line $\mathrm{BC}$?

(ii)At point C all the gases has been condensed and further application of pressure simply compresses the liquid .The line $\mathrm{CD}$ represents the compressibility of liquid Carbon Dioxide.

I have studied in my earlier classes that liquids cannot be compressed but how can the liquid $\ce{CO2}$ has a tendency of compression here?

I will expand on the key points made in the comments. There are two issues that have been brought up:

This is most easily intuited from a direct mechanical example. Consider a cylinder in which one face is a piston at vapor-liquid coexistence. Line segment BC then represents isothermal compression or expansion of the piston. As we push on the piston, the system volume decreases, and vapor condenses into liquid. As we pull on the piston, the system volume increases, and liquid evaporates into vapor.

That these processes occur just enough to maintain line segment BC as an isobar can be understood more quantitatively from thermodynamics. Phase coexistence actually places significant constraints on the system, as is quantified by Gibbs' phase rule---a system of a single chemical species at two-phase coexistence is specified by a single parameter, here the temperature $T$, because we are considering an isotherm. This implies that the pressure is known given $T$; that is, we have a relationship $P = P(T)$, and of course this is just the liquid-vapor coexistence line on a phase diagram. This pressure is, in particular, independent of the number of moles of substance in each phase, and so we must have the same pressure at phase coexistence; i.e., over the line segment BC.

Liquids cannot be compressed easily. They are effectively incompressible for small changes in pressure (hence the steepness of the curve WX), but can certainly be compressed when subject to large pressures.

2
Why do gases coexist as liquid and vapour?

2
Ideal gas law? implied volume?
5
Why is the ideal gas law so ubiquitous?
1
Non-Ideal Gas Behavior
2
Why do gases coexist as liquid and vapour?
2
How to calculate the volume or mass of carbon dioxide gas absorbed by a calcium hydroxide solution?
2
What happens when a super-critical fluid is compressed?
0
Antoine law and ideal gas law