So let's say we have a closed system in the following reaction:

In many text books, the explanation for this is that 2 moles of $\ce{NO2}$ occupy a bigger volume than 1 mole of N2O4, thus the equilibrium is restablished when more $\ce{N2O4}$ is formed. What doesn't make sense for me is that both the substances are contained in the same volume, so how 1 mole of $\ce{N2O4}$ would occupy less volume than 2 moles of $\ce{NO2}$? It only makes sense to think about partial pressures, not partial volumes, right?

I'm trying to use entropy and energy microstates to solve this problem, because it seems more fundamental than this mantra in the general chemistry textbooks. From quantum mechanics, I know (can't explain, just know; need further studying on this subject) that translational energy states become closer when a gas expands in a bigger volume, so I'm assuming that in the reaction above, with a bigger pressure (and thus a smaller volume) these energy states will be more spaced between each other. With energy states more far apart, why are there more possible energy microstates when $\ce{N2O4}$ is formed?

I can't get past this! Why does this implies in the formation of the substances with less gaseous coeficients? How are the energy states of reactants and products and their changes on pressure related with that?

Edit: to make myself clearer, I'll use this example from this textbook I'm reading: 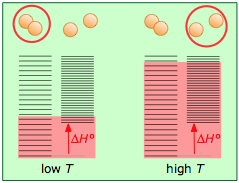 In the endothermic reaction H–H (g) ⟶ 2 H (g), you only get hydrogen atoms at very high temperatures, because you'll have a higher distribution of populated states on the 2 H side, thus you favor the products at higher temperatures for endothermic reactions. I can completely understand the effects of themperature in Le Chatelier's principle, and I'm trying to understand an analogous thought for changes in pressure in the microscopic point of view.

In order to understand this a little better you can have a look at the ideal gas law:
$$ p = \frac{nRT}{V} $$ As you can clearly see the pressure is linearly dependent on the amount of particles in the system. Given that during the reaction (in the way you stated it in your question) this amount increases (doubles if the reaction did run through completely). Thus the pressure increases as well. However a higher pressure is connected to a higher energy state of the particles in the "box" as they repulse one another.
Why don't the reactants stay as they are then as this is the state that produce the least pressure? Because by forming the products, energy is released ($\Delta_rG < 0$). Therefore the reaction can take place until the increase in pressure results in a "raise of energy" that is equal to the energy released during the reaction. Any further reaction would be energetically unfavorable.
And this point is the one that can be influenced by the volume. Let's say that the reaction can take place until the pressure reaches $1.5p_0$ and $p_0 = \frac{n_0RT}{V_0}$ (and for simplicity let's assume a isothermal reaction). This means that 50% of the the reactants can react until that limit is reached. If we increase the volume, this point is reached only after having a higher particle count than with a lower volume which is why the equilibrium shifts to the side with more gaseous particles if the volume is increased and vice versa.

A molecule's rotational states do not become closer as the pressure is increased, neither do the vibrational levels, they are a property of the molecules themselves. The population in these levels is determined by the temperature which in your case is constant. More collisions per second as the pressure is increased means more possibilities of reaction. This means that there are more chances that at a given total energy (comprised of translational, rotational & vibrational energy) the molecules will have enough energy to cross the energy barrier (transition state) between reactants and products and vice versa, i.e the number of barrier crossings both ways is increased.

The species are in equilibrium $\ce{N2O4 <=> 2NO2}$ and the equilibrium constant has a fixed value at constant temperature and is unaffected by changes in total pressure, because, as noted above, the population of energy levels depends only on temperature.

7
Where can I obtain tables of P-V-T/compression factor data?
6
Effect of temperature and Le Chatelier's principle
6
Is the standard enthalpy of formation always non-positive?
2
Molar Gibbs Energy for an ideal gas
7
Cp vs Cv for liquid water @ < 4 °C
2
Euler's Theorem and Extensive properties
2
How can Ellingham diagrams be linked to Gibbs energies of formation?