I am doing a research on cow milk adulteration. I am checking Urea and Hydrogen Peroxide content in milk by ATR-FTIR(Attenuated total reflection-Fourier Transform Infrared Spectroscopy). I am using $\ce{1M}$ Urea solution and $\ce{1M}$ Hydrogen peroxide solution. I am adding this to cow milk and testing through FTIR. But i am not getting good IR peaks of $\ce{H2O2}$.

Should i dilute the solutions? As we know, UV spectrophotometer gives better peaks at dilution. But in case of IR what should i do to get better peaks? what concentration of $\ce{H2O2}$ should i use?

In contrast to a typical sample provided by a synthetic lab your sample consists of multiple components; milk -- already consisting of many chemicals for its own, plus urea added, plus hydrogen peroxide added (as aqueous solution). Using ATR-FT-IR is indeed a good choice for characterizing such samples, both for qualitative, as well as quantitative analysis (even to the point to provide kinetic data) as non-distructive, and potentially on-line method for continous process control.

This being said, you may improve the situation in the way how the ATR data is recorded. Most often ATR-spectrometers are designed in a single-reflection geometry, wich is fine for not too complex sample compositions. Potentially better though here is to use a design with a crystal allowing multiple reflections. (Do not forget to keep the surface of the crystal clean, as (bio)films and absorbed material in general may affect the analysis, esp. with ATR flow cells.)

As a second hint, after the accumulation of your spectra, you may facilitate recognizing the barycentre of the absorption peaks by looking at their first derivative. This technique sometimes seen in the field of UV-Vis spectroscopy (ref) is equally helpful if absorption bands are broad, or -- for example because a multi-component system is scrutinized -- partially overlap (e.g., IR-imaging).

At third, data analysis. Beer-Lambert's Law, likely known from UV-Vis spectroscopy, equally is applicable in IR spectroscopy and you may choose picking an absorption band belonging only to your component of interest. Because of the complexity of your sample, however, I would suggest that you use Partial Least Squares regression analysis (PLS) as a multi-variate analysis instead. Very much simplified, instead of performing a regression analysis at one wavelength of interest, you do so for all data points, across the complete spectrum recorded, which equally allows to account for multiple components, too. Do not worry, there are programs around to assist in this process, either provided with the IR spectrometer (e.g., TQ analyst by ThermoScientific), or independented solutions (e.g., Unscrambler). Often, PLS allows to lower the detection limit compared to the approach based on a single absorption band quite a lot.

An example of determining hydrogen peroxide in water with PLS by ATR-FT-IR may be found here, of urea in milk here, or milk adultered with Hydrogen peroxide (0.15 g/L) here: 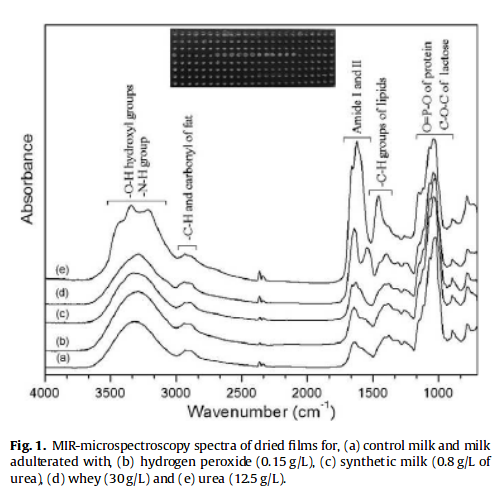 (original source of the article.)

Not the answer you're looking for? Browse other questions tagged analytical-chemistry ir-spectroscopy uv-vis-spectroscopy or ask your own question.

0
What do s, m, w, m-w, and w-s mean in the context of infrared spectroscopy?
17
Is it “common practice in Fourier transform spectroscopy to multiply the measured interferogram by an apodizing function”? If so, why?