Stability of geometrical isomers in cycloalkanes

My thought process is-cis isomers with adjacent OH groups lead to Hydrogen bonding so 1) should be the most stable, I'm not sure if repulsion will be the dominating factor and change the answer- what is the correct way to think about this?

To answer this question, you needs to know what are the values for each acting forces on the cyclohexane frame work. Without that information, nobody would know if the repulsion forces (steric) would or would not be the dominating factor over hyrdogen bonding (electronic). Once we know the answer for that, you'd be able to calculate and find out the most stable structure. For your convenience, I attached a diagram with the chair conformations of all four structures and their Newman projections to make you understand the hydrogen bonding capabilities: 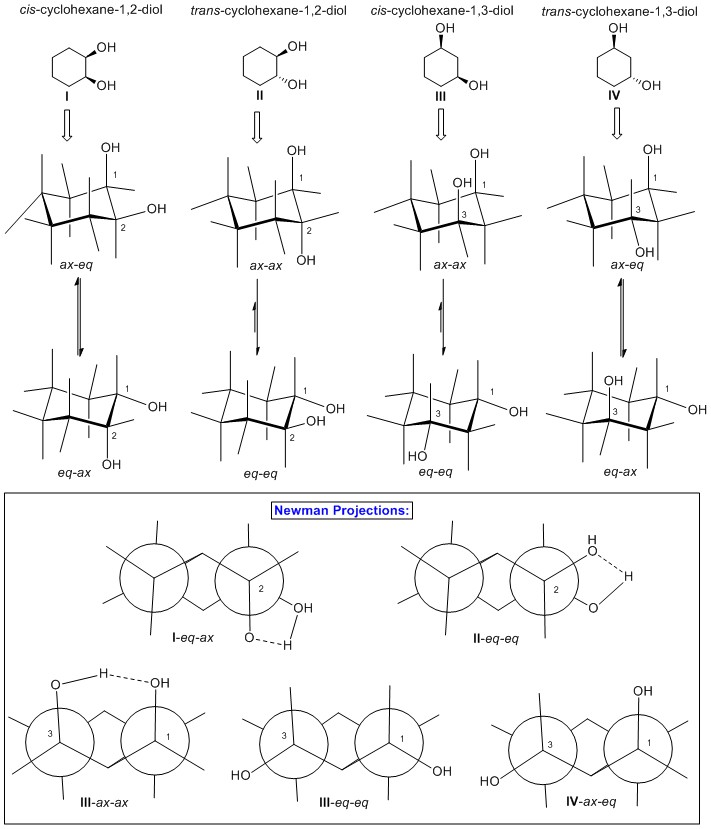 As you see, if the substitutions are not capable of hydrogen bonding, it is obvious that 1,3-cis structure is the most stable considering only stecic factors (eq-eq conformer). 1,3-trans structure (eq-eq conformer) is also stable relative to others but has an additional gauche interaction of vicinal bulky groups (1,2-substitutions) compared to its 1,3-counterpart.

According to the same study (Ref.1), cis-cyclohexane-1,3-diol is $\pu{10.9 kcal/mol}$ more acidic than trans-cyclohexane-1,3-diol, thus cis-compound is highly stable than its trans-counterpart (also remember, trans-cyclohexane-1,3-diol cannot have hydrogen bonding (vide spupra)). However, between conformers, the diaxial and diequatorial conformations in cis-cyclohexane-1,3-diol are relatively close in energy, so it is not immediately clear which conformation is dominant (Ref.1). Yet, a solution NMR study of this molecule showed that the diequatorial conformer (III-eq-eq) is more stable than diaxial conformar (III-eq-eq) Ref.2, although III-eq-eq is impossible to make hydrogen bonding (see Newman projections of III-eq-eq and III-ax-ax). This shows that hydrogen bonding itself cannot overcome the steric repulsions induced by the 1,3-ax-ax-interactions. My conclusion is without knowing values of these attraction and repulsion interactions, it is impossible to say which of the three structures, I, II, and III), is the most stable.

Not the answer you're looking for? Browse other questions tagged organic-chemistry stereochemistry stability hydrogen-bond geometrical-isomerism or ask your own question.

8
Which is most stable conformation of optically inactive butane-2,3-diol?
10
Number of stereoisomers of a polyene
3
Can wedge and dash bonds on 1, 2 position of cyclohexane ring be used to signify trans orientation of the substituents?
0
Stability order of octahydrobiphenylenes
3
How many stereoisomers are possible for 1,2-dimethyl-4-(propan-2-ylidene)cyclopentane?
2
Heat of hydrogenation of 1,3-substituted cyclohexanes
6
Stability of dialkyl substituted alkenes