Is there a simple way to get the circular dichroism of a molecule from its structure?

Are there any heuristics to get the relative absorbtion of left and right circularly polarized light by a molecule from its molecular structure? Is it even possible to predict which polarization is selectively absorbed?

Is there a simple way to get the circular dichroism of a molecule from it's structure?

Short Answer: Yes, for many molecules if you know the molecule's structure, then you can predict the shape of the optical rotary dispersion (ORD) or circular dichroism (CD) curve. Conversely, and perhaps more importantly, if you know the shape of the ORD or CD curve, then you can predict the molecule's structure, in particular, the absolute configuration at chiral centers in the molecule. There are many empirical techniques, such as the "Octant" rule. These methods are based on numerous experimental observations that have been codified into sets of rules for different classes of compounds. These empirical rules can be used to determine the absolute configuration of cyclic ketones, conjugated dienes, alpha, beta-unsaturated ketones, twisted biphenyls as well as other systems.

The following figure shows the uv-vis absorption (blue line), ORD curve (green line) and CD curve (red line) for the two enantiomers of camphor sulfonic acid. Note how the ORD and CD curves for one enantiomer are mirror images of the same curves for the other enantiomer. It is the carbonyl chromophore's $\ce{n->\pi^{\ast}}$ absorption that is responsible for the curves seen in this image. In ORD spectra there are typically 2 maxima, one positive and one negative. The positive maxima is a "peak", while the negative maxima is termed a "trough". If, when moving from longer to shorter wavelength, a peak is encountered first, then the ORD curve is said to be positive (+). Conversely, if a trough is encountered first, then the ORD curve is negative (-). 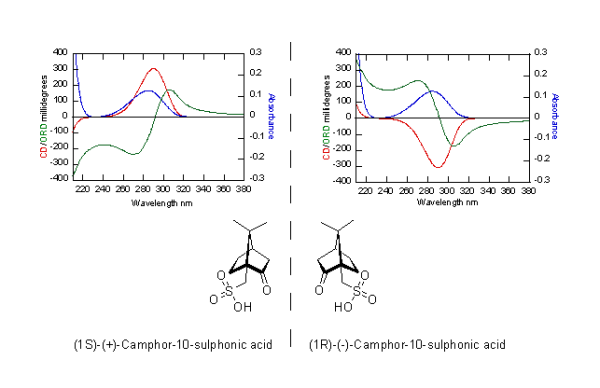 With that information as background, we can now apply these concepts to the examination of real molecules. One of the most studied classes of molecules where these concepts have been applied are the substituted cyclohexanones. In the early 60's Djerassi, Moffitt, Woodward, Moscowitz and Klyne (some of the greats!) developed an empirical set of rules to predict the absolute configuration of chiral centers in substituted cyclohexanones. The rule became known as the "Octant" rule and came about because of the work they were doing with complex natural products that often contained a substituted cyclohexanone ring. They would run a reaction on a pure enantiomer of a cyclohexanone containing natural product and wanted a method to quickly determine if a chiral carbon in the molecule retained its absolute configuration or if the configuration was inverted in the reaction. After comparing ORD curves from countless cyclohexanone containing natural products, they were able to compile their observations into the Octant rule.

As its name implies, the Octant rule divides the region around a cyclohexanone carbonyl into 8 regions or octants. As the picture below (left part of figure) illustrates, the octants are generated by bisecting the carbonyl group with 3 planes. Two of the planes contain the carbonyl group. One divides the carbonyl into top and bottom regions and the other divides the carbonyl into right and left regions. The third plane actually passes through the middle of the carbonyl and is perpendicular to the 2 other planes. This third plane divides the molecule into front and back regions. There are a few molecules that do have substituents in the front region, but most molecules do not, so we can usually simplify our analysis by only considering the 4 rear octants. Each octant is also assigned a plus or minus symbol telling us whether we would expect a substituent in the octant to contribute in a positive or negative manner to the ORD or CD curves.

The figure on the right shows how a cyclohexanone would be placed in the octant diagram and how its projection appears as a rectangle when sighted down the carbonyl group.

Let's examine the case of 3-methyl cyclohexanone. First let’s draw the possible conformers of both S- and R-3-methylcyclohexanone

More detail on the 3-cyclohexanone example, as well a nice, concise review of ORD can be found here.

Books have been written on this subject so there is much that I have left out. For those who would like to explore further here are a few phrases that, in addition to the previous link, can help you get started: Cotton effect, ORD biological applications, and magnetic circular dichroism

Predicting the circular dichroism of a molecule ab initio is possible, but pretty difficult. The only way I know of doing that is advanced quantum chemistry calculations, for example in the time-dependent density functional theory (TD-DFT) approach. You can find an example of its use on a small organic molecule in this publication, and a mention of this on the VCD page of Wikipedia.

Regarding heuristics, I don't think there are any… a fully characterization of the spectrum by quantum chemistry calculations seem unavoidable due to the complexity of the problem.

Not the answer you're looking for? Browse other questions tagged physical-chemistry chirality or ask your own question.

12
What is the difference between quantities reported as optical rotation and circular birefringence?
22
Mechanistic Explanation of Circular Dichroism
4
Dependence of the angle of rotation on the wavelength of plane polarized light

10
Chemical properties of isotopes
22
Molecular chirality and optical rotation
12
Maximum observed optical rotation through a polarimeter
4
Plasma creation and condensation
6
M/P nomenclature for axial-chirality
14
Are there any (simple) molecules with very different absorption and emission dipole directions?
11
Are there chiral compounds that don't rotate plane-polarized light?
3
Is the existence of chirality center equivalent to chiral?