Rearranging the Eyring equation leads to the following:

where $k$ is the rate constant, $h$ is the Planck constant, $R$ is the universal gas constant, $k_\text{B}$ is the Boltzmann constant, $T$ is temperature, $H$ is enthalpy, and $S$ is entropy. The entropy term should ultimately be in units of $\mathrm{\frac{J}{mol\ K}}$. The right term of the equation will clearly yield the correct units. For the left term, the universal gas constant can be expressed in $\mathrm{\frac{J}{mol\ K}}$, which means that the log term should be dimensionless. For the bottom part of the fraction, the units evaluate to $\mathrm{J}$. For the top part, the Planck constant has units of $\mathrm{J\cdot s}$. To get the top part of the fraction to evaluate to $\mathrm{J}$, the rate constant would have to be in units of $\mathrm{s^{-1}}$. For first order reactions, this is indeed the case. For reactions of higher order, this will never work out to the correct units.

Using Transition State Theory (TST) one has to be aware of at least some of the many flaws of it. And may also often lead to wrong assumptions. However, it is a wonderful tool to describe basic kinetics in a theoretical manner.

The most important/ fundamental assumptions are

In other words TST reduces a very complicated multidimensional problem to a one-dimensional translation. That implies that all treated molecules must be connected on a potential energy hypersurface with one vector. (Borrowing from the amazing wikipedia) 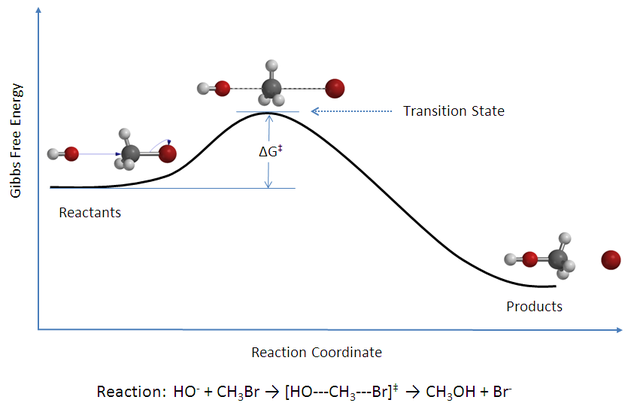 Hence reactions that are described with TST are of first order by default. One would have to make various adjustments to treat higher orders (and I would assume that not matching units would be of minor concern).

You are correct in your analysis that the rate constant is first order with units $\ce s^{-1}$. The problem you have is that the Eyring equation you use is not complete as I try to show below after some introduction. (The derivation I use can be found in several texts, but I outline that in Steinfeld, Fransisco & Hase, 'Chemical Kinetics & Dynamics')

The idea behind Transition State Theory (TST) is that the reactants are assumed to be in thermal equilibrium with the transition state. This is a small region at the top of the potential energy barrier that separates reactants and products. A contour plot of an A + BC reaction ($\ce{F + H2}$ ) is shown in the first figure (together with a single reaction trajectory). 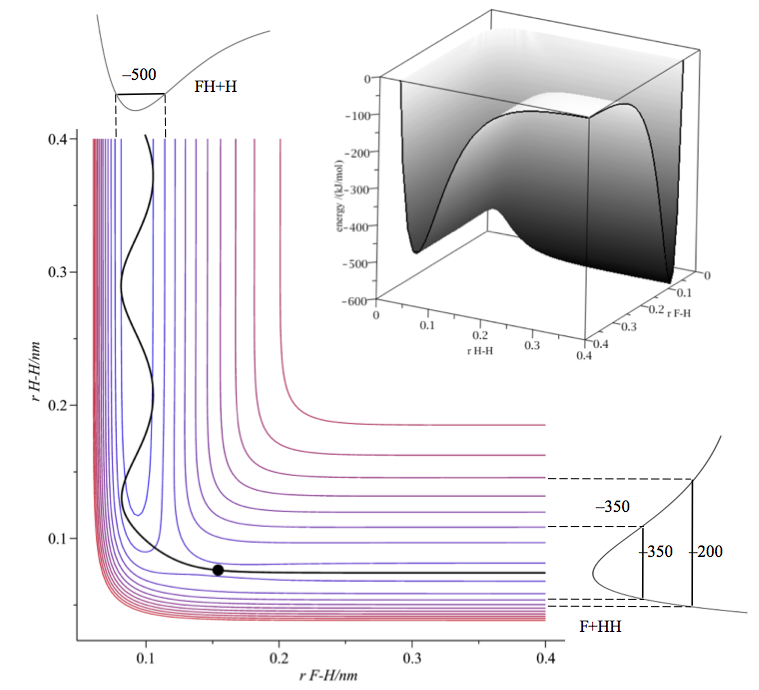 The transition state is labelled with a dot and lies at a saddle point, which is to say that the potential is convex along the reaction path and concave in a perpendicular direction to this, see second figure.
Following the reaction path from right to left (contour first figure) we see that on collision the reactants climb the (rather small) barrier and cross to products. The product is formed with some considerable vibrational energy. The profile along the reaction path (or reaction coordinate) is the familiar potential energy hill between reactants and products. 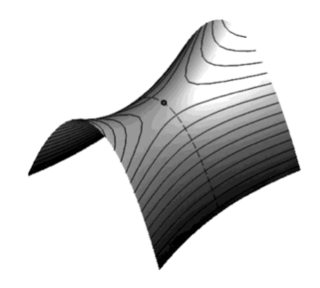 There are a number of assumptions in deriving TST. The two basic ones are
(a) that nuclear and electron motion can each be separated (similarly to the Born-Oppenheimer approximation use to solve the Schroedinger equation), and it is further assumed that the energy for translation, vibration and rotational motion can be treated additively) and
(b) the reactant molecule’s energy is distributed among its states, i.e. translation, vibration, rotation according to the Maxwell-Boltzmann distribution.

To calculate the rate constant k the speed of crossing the transition state and the number of molecules doing so has to be calculated. Let the reaction be a general second order one $\ce{A + B \rightarrow C }$ with rate equation $\ce{d[A]/dt=-$k$[A][B]}$.

In the reaction $\ce{A + B \rightarrow X^\ddagger \rightarrow C}$, where $\ce{X^\ddagger}$ is the transition state, suppose that there is a small region of length $\delta$ at the top of the barrier that the reactants must all pass through. Imagine this as a very thin dividing surface, reactants on one side and products on the other. At equilibrium the rate of forwards and backwards motion through this region must be the same, consequently if the cooncentration is $N^\ddagger$ then
$$N^\ddagger = K^\ddagger\ce{[A][B]}$$ Now suppose that all the products are removed from equilibrium and as these are half of the total $N^\ddagger$ the number going forwards to products is $N_f^\ddagger = K^\ddagger\ce{[A][B]}/2$ which is the quasi equilibrium hypothesis.

All that now remains is to calculate the partition functions. The parameters needed have to be guessed for the transition state as they are generally unknown, no transition state ever having being identified spectroscopically. The values needed are vibrational frequencies, moments of inertia reactants and shape, linear or bent. The general partition function is split into a product of terms, $Z_{ trans} Z_{rot}Z_{vib}Z_{elec}$. This is assumption (a) above, separating electronic and nuclear motions.

Finally, the whole rate constant may need to be multiplied by a symmetry or statistical factor, e.g. in $\ce{F + H2}$ the rate constant needs an addition factor of 2.

(A) The volume appears because we need to convert the thermodynamic equilibrium constant k (ratio of partition functions) into $k_c$ the chemical one which uses concentrations.

(B) The equations for partition functions are well known, are listed on many phys. chem. textbooks, e.g. McQuarrie & Simon ‘Physical Chemistry’ chapter 1, but the Wikipedia page is rather technical so they are listed below$^{2}$.

(A)As the transition state properties are not known, reactions between complicated molecules are unlikely to give accurate values.
(B) Molecules in solution are limited by diffusion to a maximum value determined by diffusion constants and hence solution viscosity.
(c) More recent treatments by Kramers discuss how, in solution, the rate constant depends on friction of the reaction coordinate (see Daune ‘Molecular Biophysics).

(1) The average of a quantity x with distribution $p(x)$ is calculated with the integral ratio $\int xp(x)dx~/\int p(x)dx$. (The denominator is the normalising term, equivalent to the total number when making a simple average of any set of objects, i.e. $\Sigma x/N)$.

(2) The partition function is defined as the ‘sum over states’, $$Z=\Sigma _i g_i exp(-E_i/(k_BT))$$ where $g_i$ is the degeneracy of the energy levels $E_i$. When the energy levels are close (as in translation) the summation is replaced with an integral.

The electronic partition function is the multiplicity of the state, most commonly 1.

Not the answer you're looking for? Browse other questions tagged reaction-mechanism kinetics theoretical-chemistry or ask your own question.