In which of the following compounds are all tetrahedral voids vacant?

Kindly explain what this question asks from me and provide a detailed answer. Also, please explain tetrahedral voids.

So in the NaCl lattice you have either $\ce{Na^+}$ or $\ce{Cl^-}$ forming the ccp while the other one occupies all of the octahedral voids. This means there are no tetrahedral voids occupied. You can see this if you look for the $\ce{NaCl}$ structure on the net where they drew in the polyhedra. Both of them are octahedra only.

$\ce{CaF2}$ is a structure where the $\ce{Ca^2+}$ cations form the ccp and the $\ce{2 F^- }$ anions occupy all of the tetrahedral voids. You can see this as well when you look at the structures, there should be a tetrahedron in there.

Now $\ce{CaF2}$ marks the beginning of a whole series of cubic and hexagonal structures by something we call 'thinning' (at least in German). What happens here is that we start to occupy fewer and fewer tetrahedral voids. The first series, where half of the tetrahedral voids are filled only are: $\ce{ZnS}$, $\ce{PtS}$, $\ce{PbO}$ and the hexagonal $\ce{ZnS}$ and the hexagonal $\ce{BeO}$.

Therefore $\ce{ZnS}$ being cubic and hexagonal (wurtzite) has half of the tetrahedral voids filled only.

Finally, there is the $\ce{Na2O}$. $\ce{Na2O}$ or $\ce{Li2O}$ is what we call an anti-type to $\ce{CaF2}$. It features the same setting but the atoms are switched. So this means still all tetrahedral voids filled.

As I was asked to edit my post to also include some picture I did the following here. The crystal structures were taken from the ICSD. The ionic radii were chosen from the Shannon table. There is a problem with structures on the net. They often forget a proper scaling of atoms. You cannot simply take the ionic radii you find on the net. The ionic radius is dependend on the coordination geometry. So it depends whether your anion or cation sits in an octahedron or a tetrahedron. I scaled all of them to a common size by deviding them by 2.5.

In the first structure you can see the $\ce{NaCl}$ with both polyhedra added. As you can see they are all octahedrally coordinated. So there is no tetrahedral void filled here.

Next is the $\ce{CaF2}$ and the $\ce{Na2O}$ structure. Both $\ce{CaF2}$ and $\ce{Na2O}$ crystallize in the same space group Fm-3m. For $\ce{CaF2}$ the $\ce{Ca^2+}$ occupy the 4a Wyckoff-position and the $\ce{F^-}$ occupy the 8c Wyckoff-position. If you look at $\ce{Na2O}$ it has the same space group and $\ce{O^2-}$ has the 4a and $\ce{Na^+}$ has the 8c so metal and non metal or cation and anion swapped places. This is what we call the anti-type. Therefore both have the same amount of voids be it octahedral or tetrahedral filled. As you can see there is a cubic coordination around the 4a position and a tetrahedral around the 8c position.

Finally to your $\ce{ZnS}$. Both the cubic and the hexagonal phase can be derived from the $\ce{CaF2}$ lattice which results in tetrahedra around both ions.

Just in case it might not be visible from the structures I highlighted the tetrahedral voids that match in both structures. From this you should be able to see that half of the tetrahedral voids are now vacant. The structure which forms is a diamond-type structure due to what we call Grimm-Sommerfeld rule. If you look where $\ce{Zn}$ and where $\ce{S}$ are in the PSE you can see that in the middle of them we find Carbon or Silicon. So it adopts this structure. For $\ce{PtS}$, which is also a half filled $\ce{CaF2}$-type the atoms arrange so the $\ce{d^8}$ on $\ce{Pt(II)}$ get's his desired square plane coordination. For $\ce{PbO}$ we have quite large gaps because $\ce{PbO}$ has a lone pair and those lone pairs can then point into the empty space. 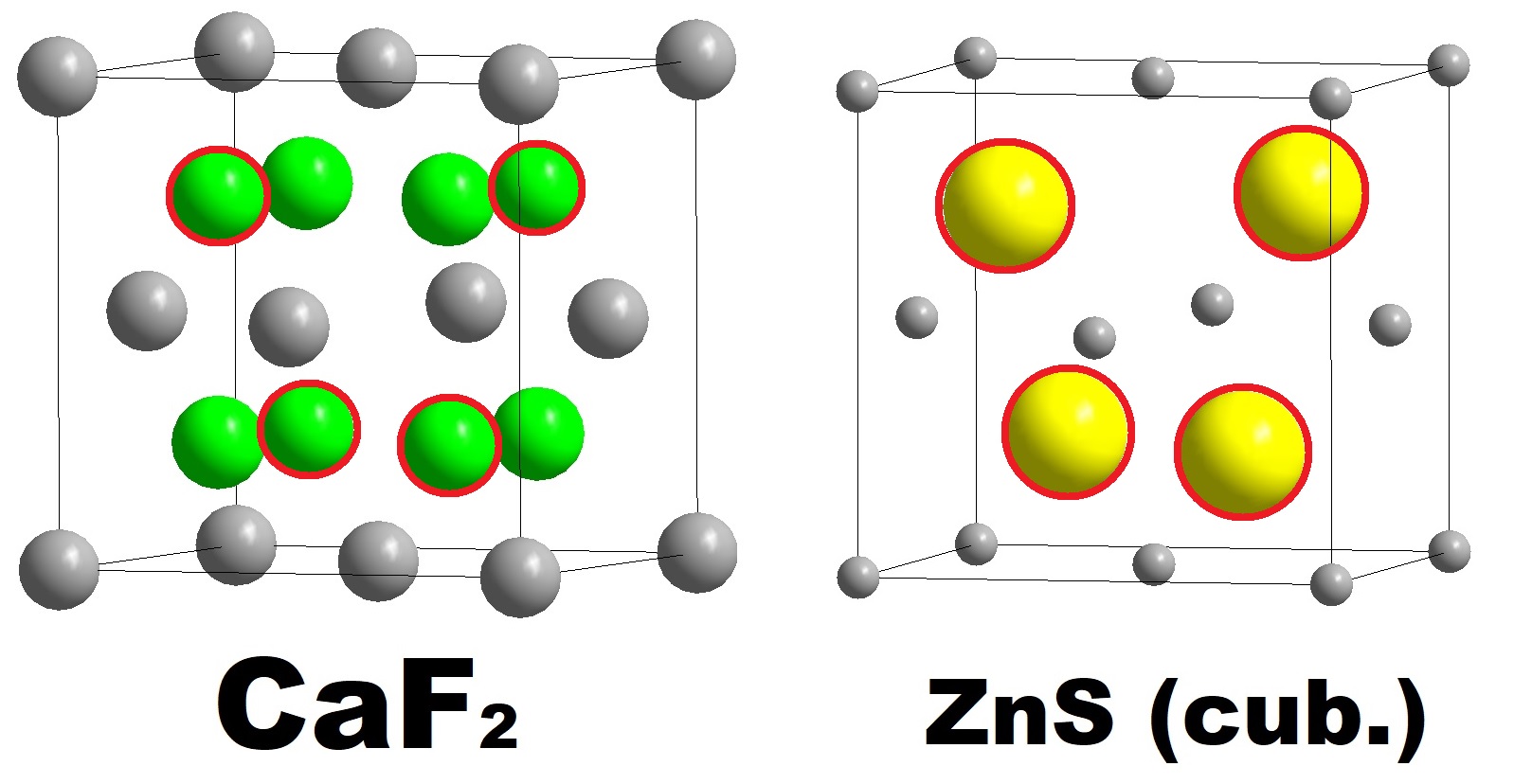 10
Why does an ideal capacitor give rise to a rectangular cyclic voltammogram (CV)?
2
Why there exist no void with co-ordination number 5
12
Why is solid phase peptide synthesis limited to 70 amino acids?
1
Comparing the Lattice energy of different compounds
1
Contribution of Tetrahedral and Octahedral voids in HCP