My professor asked us the reason of the melting point of potash alum being so low, despite it being an ionic salt. He later went on to answer it by saying that melting point is a misnomer for the phenomenon that is happening here.

What's happening here is that the alum is losing its water of hydration and is then dissolving in that water itself. So it is actually a dissolution point rather than melting point.

I couldn't find any sources for what he said. Though what he said makes logical sense, I would like to read a bit more about it. Can you please provide some sources confirming what my professor said?

Your professor's premise of dissolution is only true if the process is incongruent melting which by the way is still melting. Whereby the process proceeds as:

This concept is outlined in the generic binary phase diagram below where $\alpha$ is anhydrous potash alum, $\beta$ is the hydrated form, and liquid is potash alum solution. Above a certain temperature $\beta$ will decompose into $\alpha$ and liquid. As the temperature rises more potash alum will dissolve until eventually it will all be liquid again. 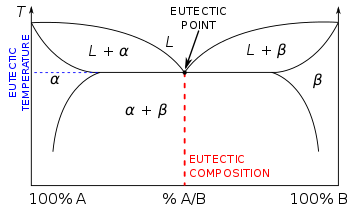 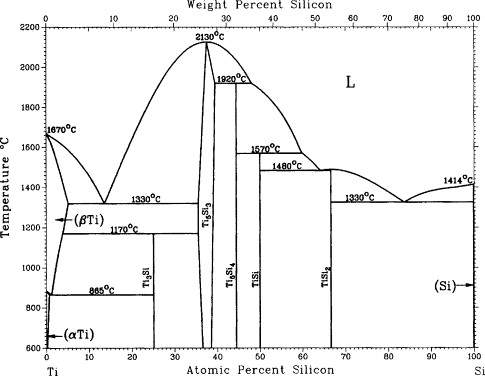 Usually differential scanning calorimetry is used to determine which melting regime you are in indicated by a range of temperature causing a spike in heating rate corresponding to incongruent melting or a single temperature where heating spikes which would indicate congruent melting.

In this case, however, we can confidently assume that $\ce{KAl(SO4)2.12H2O}$ is under going incongruent melting since it melts above the temperature of water and below the temperature of the anhydrate and there are no other hydrates that it forms, the process is the peritectic melting thus the process your professor describes is correct, but it is still considered a melting process.

Not the answer you're looking for? Browse other questions tagged inorganic-chemistry experimental-chemistry melting-point or ask your own question.