How many samples would be worth when following a desorption? How to relate with limit of detection?

I am following the desorption of a compound from a polymer. Let's imagine that it occurs at a certain rate and most of the compound is desorbed after 5 days (as in the figure). Then, I could use many analytical techniques to follow the compound desorption by measuring at, e.g., t = 1 day and t = 4 d. The concentration difference between these two points is large enough to be detected. 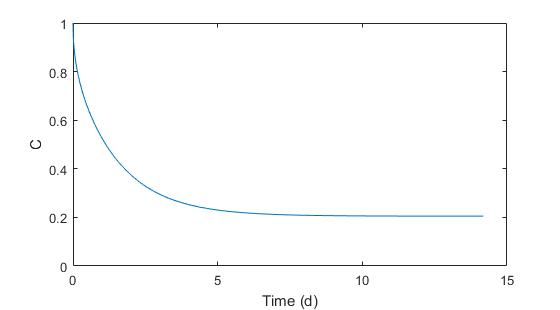 However, if I the desorption is much slower (as in the figure below) and I can only take samples for 10 days, the only way to characterise the desorption rate would be with a much more sensitive analytical technique, as I would need to detect changes from, e.g. 0.98 to 0.96

My question is, supposing that I have a good guess of the concentration differences that I will encounter, how can I choose an analytical technique beforehand based on reported limits of detection and/or quantification? How can I relate limits of quantification with the ability to differentiate a sample at 0.98 and another one at 0.96?

I think you are confusing two concepts: the limit of quantification (LOQ) and the sensitivity of the technique.

Sensitivity, on the other hand, is the method's ability to distinguish between different amounts of analyte.

There are some guidelines that do not make a differentiation between the two (such as in the FDA's Bioanalytical Method Validation guidance document), but this is generally not the case in other situations.

As for the limit of quantification, you need to ask yourself what is the lowest concentration of analyte that you want to quantify. Based on the decay plot you have shown, it seems like the lowest concentration you would encounter is above 0.8 a.u. In that case, a method with an LOQ of 0.8 a.u should be sufficient. If you want to be even more rigorous, your LOQ should be at a level that is low enough that even if it is extended by the expanded standard uncertainty of your method, it should still be low enough to quantify the lowest level of analyte you expect to encounter.

Not the answer you're looking for? Browse other questions tagged analytical-chemistry concentration or ask your own question.

2
How are samples prepared for analysis with ICP-OES? Can it analyse gases?
3
How to calculate the detection limit?
2
How many moles NH4Cl must be added to NH3 to create buffer with pH=9?
2
How would I measure the dissolved carbon dioxide content of a liquid (water to start with)