Why do electrons in sigma bonds have zero orbital angular momentum about the internuclear axis?

As per the title, why do electrons in σ-bonds have zero orbital angular momentum about the internuclear axis?

As far as I know, the outermost electrons participate in bonding. Suppose that the 3p electrons are the outermost and form a σ-bond. Initially, their individual orbital angular momenta are

since they have the orbital angular momentum quantum number $l = 1$. How can this become zero after forming a σ-bond?

My quantum is slightly rusty, but I think this is how it goes (I would appreciate any corrections or clarifications). We're talking about diatomic molecules here. As you no doubt know, σ-orbitals are invariant about rotation around the internuclear axis: that is to say, you can rotate the molecule as much as you like, but the sigma orbital will still look the same. This is true whether the sigma orbital is made from s, p, or d orbitals.

If we define the $z$-axis to be the internuclear axis and $\phi$ to be the angle around this axis (the azimuthal angle), then we can also say that σ-orbitals have no dependence on the angle $\phi$. 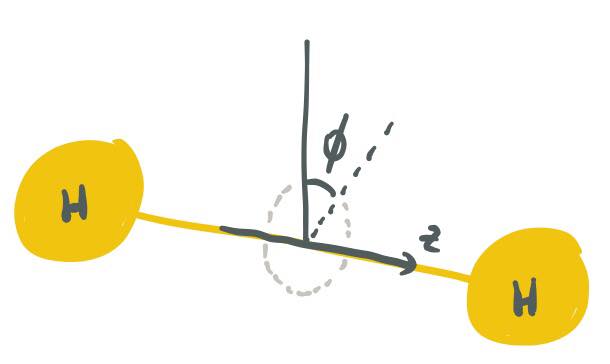 In a diatomic molecule, because the orbital angular momentum (OAM) operator $\hat{L}$ does not commute with the Hamiltonian, the quantum number $l$ is no longer a 'good quantum number': that is to say, the eigenstates of the Hamiltonian (which are the MOs) are no longer simultaneously eigenstates of $\hat{L}$, so the MOs do not have a specific value of $l$ that can be assigned to them. However, for a one-electron molecule (e.g. $\ce{H2+}$) it turns out that $\hat{L}_z$ still commutes with the Hamiltonian, where the $z$-axis is the internuclear axis (or molecular axis). This operator represents the projection of the OAM onto the internuclear axis, and the corresponding quantum number is denoted $m_L$ or $\lambda$ (depending on where you read).

Now, let's denote the wavefunction of the σ-orbital by $\psi$. We know that the eigenvalues of $\hat{L}_z$ are unit multiples of $\hbar$, or in other words, $\hat{L}_z\psi = m_L\hbar\psi$. [Note that this is no different to $\hat{L_z}\psi = m_l\hbar\psi$ in an atom, except that we use a capital L because the context is different, i.e. we are talking about a diatomic molecule.]

It doesn't matter what the constituent atomic orbitals are. However, I thought a bit of clarification would be useful. For the atomic p-orbitals, you are correct that these possess $l = 1$. However, note that $l$ is a quantum number which characterises the magnitude of the angular momentum, whereas $\lambda$, or $m_L$, is a projection quantum number. That is to say, it is possible to "add" two atomic orbitals with $l = 1$ and have the projection cancel out.

If you think about the projection of the orbital angular momenta in the original p-orbitals, they are of course $m_l = (+1,0,-1)$. However, these are the complex p-orbitals which are obtained as eigenstates of $\hat{L}_z$. The real p-orbitals, i.e. the dumbbell-shaped p-orbitals that you and I think about when constructing sigma bonds, are either $m_l = 0$ (i.e. the $\mathrm p_z$ orbital) or are linear combinations of $m_l = \pm 1$ (i.e. the $\mathrm p_x$ and $\mathrm p_y$ orbitals). So, it's not at all counterintuitive that when you add these together to form sigma bonds, the projection $m_L$ is simply zero.