How is the structure of triiodide ion (I3-) possible?

I have seen the structure of triiodide ion ($\ce{I3-}$) but I cannot understand why this structure is even possible. I have seen in my textbook that

But I think $\ce{I-}$ is stable due to its complete octet. Then why it should combine with $\ce{I2}$ molecule to form another new compound? I am confused because the Lewis structure of $\ce{I3-}$ would not make any sense if we consider the octet of central iodine atom.

First things first: the bonding orbitals of $\ce{I3-}$ do not contain any significant d-orbital contributions. In fact, the $\ce{I-I}$ bond lengths are significantly longer than in $\ce{I2}$, suggesting a lower bond order.

In fact, the triiodide anion should rather be imagined as a 4-electron-3-centre bond (bond order approximately 0.5) which might be easier to understand using this mesomeric depiction:

What happens orbital-wise in this? Simplistically speaking, a 4-electron-3-centre bond is made up of the following molecular orbitals stemming from $\mathrm p_z$ orbitals of the individual iodine atoms:

Why does this happen although the starting compounds iodide and $\ce{I2}$ are stable on their own? Obviously, most reactions happen although both starting materials are full-octet compounds and inherently stable in some way or another. And most happen because the products are more stable. So we just need to determine why it is favourable for $\ce{I- + I2}$ to react to form $\ce{I3-}$.

The simplest answer is distribution of charge. Rather than have a single negative charge on one atom you end up with a structure that has approximately half a negative charge on two different atoms if you take the resonance structures at face value (hint: don’t). Whatever the final picture is, the negative charge will be more distributed over a greater number of atoms than before. This is, very generally speaking, a great stabilisation and we can stop here.

When the three iodine atoms all come together in a line the overlap among all three atoms gives the combination of $p$ orbitals rendered thusly (source: Wikipedia by Arun Sridharan): 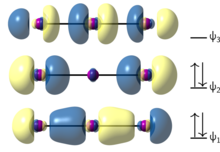 Only the lowest orbital gives a bond but, because it involves overlapping all three atoms instead of just two, it's a stronger bond than just the two-center bond in $\ce{I_2}$. However, the three-center bond is distributed over two linkages instead of one and so each individual linkage is less strongly bonded than an $\ce{I_2}$ molecule.

Which leads to the reverse problem. Why is this a property of iodine? Why don't other halogens do the same thing? In fact the other halogens do form three-atom complexes, as we shall see; but they do so with increasing difficulty as we move to lighter halogens.

What is the lightest known trihalide ion, then, given the fact of these evil nonmolecular electrostatic interactions? The answer may surprise a few people.

This ion is actually fairly commonplace if you know where to look, which could be an organic chem lab. Pyridinium tribromide, $\ce{(C5H6N)^+(Br3)^-}$, is used as a brominating agent for reactive substrates such as phenols; it is easier to handle than liquid bromine. We therefore move on to a bigger, or smaller, challenge:

The $\ce{Cl_3^-}$ ion has been obtained from electrochemical studies in suitable solvents such as acetonitrile, for example see here.

Trichloride ion is also obtained as an ionic liquid by adding chlorine to an ordinary chloride salt. These species can be used as chlorinating/oxidizing agents in circumstances where organic solvents would be prone to side reactions with the chlorine. The reference given here includes a list of trichloride ion bearing materials, both solid and liquid.

Surely we have reached our wit's end? This reference reported that trifluoride ion has been observed in a low-temperature noble gas matrix and at low pressure in the gas phase. The same reference also reports that the main contributing structures for this ion involves radical combinations rather than the ion-molecule model we might ordinarily expect for this type of complex.

5
Is the 5d orbital involved in triiodide ion?
6
Formal charges on polyatomic ions
0
Does the molecule LiF3 exist?
-3
In what form does the respective halides of thallium exist as?

8
Is this a valid structure for the nitrate ion?
2
Where does the extra electron come from in the Lewis Dot Electron structure of say for example nitrate ion?
4
Contact explosion of nitrogen triiodide
4
How are the hydrogens attached to the nitrogen atom in the ammonium ion?
3
Why triiodide ion does not form ionic bond with cation having +2 charge?
5
Is the 5d orbital involved in triiodide ion?