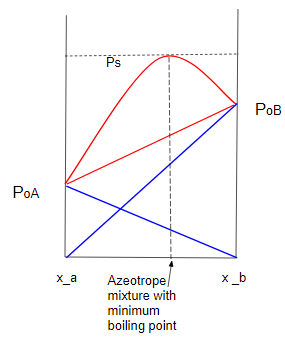 Consider two liquids with vapour pressures in pure form being ${P^o}_A$ and ${P^o}_B$. ${P^o}_B >{P^o}_A$ which implies liquid B is more volatile. If the liquids formed an ideal solution, then a straight line (drawn with red in the diagram) will be obtained for the vapour pressure of the solution. However, if they formed a non ideal solution with positive deviation, the red curve would have been obtained.

These points are really not explicit from the graph. I am not able to figure out the reasons for those points. Can someone please provide a mathematical/ intuitive view of azeotropes relating to these 3 properties?

I will first enumerate the four points that need to be addressed.

I will assume the definition of an azeotrope to be a solution whose composition is such that it exists at a local extremum of a Pxy or Txy plot. I prefer to instead take 1. as a definition, in which case my original definition follows as a property of an azeotrope, but both approaches are equivalent.

"Proof" of 1., by contradiction. Overlay the corresponding vapor pressure curve as a function of $y_A$ to make your plot a Pxy plot for species $A$. This new vapor pressure curve must touch the original curve at the azeotropic composition $x^*=y^*=z$, for otherwise a tie line would connect two vapor phases at some $P$, which is physically unreasonable.

Proof of 3. Refer to the Pxy plot from 1. The dew point and bubble point coincide at the azeotrope, and so must the compositions of each phase.

Proof of 4. Fractional distillation is based on the composition of the vapor and liquid phases being different. This is precluded by 3. in an azeotrope.

Not the answer you're looking for? Browse other questions tagged physical-chemistry solutions liquids or ask your own question.

10
Why and how are azeotropes formed?
6
Azeotropes and separation by distillation?

6
Azeotropes and separation by distillation?
3
Condition for formation of azeotropes
0
Boiling point elevation for a mixture of ethanol and water
2
Azeotropic mixtures and Raoult's Law
6
Does Raoult's law hold for immiscible liquids?
1
Why does Raoult's Law have a weighted sum instead of a direct sum?