Which compound can exist as stereoisomers?

I'm having trouble in understanding how to identify chemical compounds as stereoisomers.

In the question below, D is the correct answer according to the markscheme. I've drawn out the chemical structure but am unable to see what possible stereoisomers it can form.

I also tried visualising the possible isomers on Wolfram Alpha:

There are two isomers which stand out to me, which I guess are the stereoisomers?

However, to me it looks like they are just rotated versions of each other. 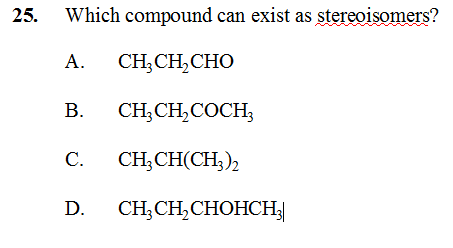 "D" is the correct answer. 2-Butanol exists as two stereoisomers, R- and S-2-butanol, just as you described. The "2" carbon in 2-butanol is a chiral carbon atom, it has 4 different groups attached to it (ethyl, methyl, hydroxyl and a hydrogen atom). The R and S forms of 2-butanol cannot be rotated one into the other, they can only be interconverted by reflecting one in a mirror. They are non-superimposable mirror images like your right and left hand. Build a model of 2-butanol and then build a second model that is the mirror image of the first - you'll find that you cannot intercovert them by rotation and one is not superimposable upon the other.

http://osf1.gmu.edu/~bbishop1/CHEM%20814-579%20Stereochemistry%20Lecture%20slides.pdf
Everything you ever wanted to know about stereoisomerism.

Rigorous answer (Michel Petitjohn, J. Math. Phys. 40, 4587 (1999) et al.): Any collection of anonymous unit mass countable points that sum to finite principle moments of inertia, in any number of dimensions greater than zero, that cannot be superposed upon its mirror image (one coordinate with all reversed signs) strictly by translations and rotations, is chiral. An infinite number ($\ce{Aleph_0}$) of points in a hyperbolic tiling qualifies. Petitjohn's QCM software quantitatively calculates geometric chirality.

That last one is important. It is a recipe for creating an acyclic, undistorted tetrahedral carbon atom bearing four rigorously identical, freely rotating subtsituents that is a chiral center. Planar $\ce{sp^2}$ carbons can be chiral. It demonstrates that no organic nomenclature for chirality can be complete. It demonstrates that at least one physics founding postulate describing vacuum symmetries can be testably defective, measurably empirically falsified by chemical constructs.

To exhibit stereoisomerism, a compound must have a chiral centre i.e - a carbon atom with four different groups attached.

D is the only compound that meets this requirement.