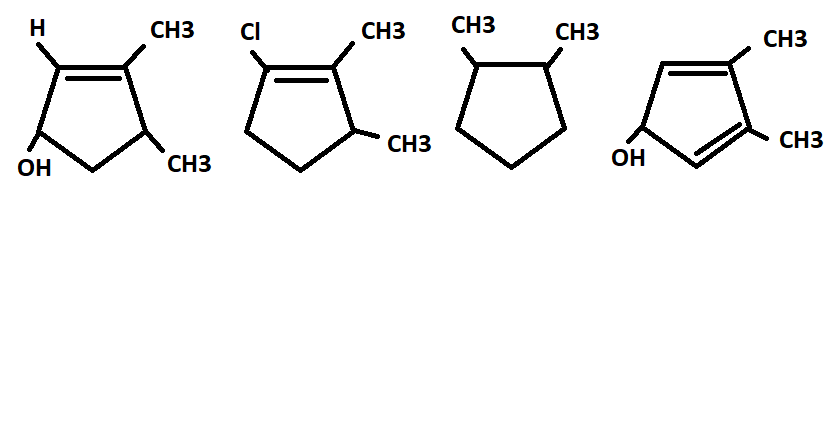 My book says the first and third molecules only will show geometrical isomerism. Why is this so? I can understand how the third will show (both the methyl groups can be into the screen or one can be into and one can emerge from the screen) but what about the others? And if the first shows geometrical isomerism why then doesn't the second? They are fairly similar except for the -OH substituent.

Only compounds I and III will show geometrical isomerism.

Compound 1 - the double bond is not causing the isomerism. In fact this double bond cant show geometrical isomerism because of twisting of the ring structure for the second pair of isomer. So, how is this showing isomerism then ? The answer lies with the two sp3 hybridized carbons one with OH and the other with CH3 attached. Here the other atoms attached are Hydrogen so hydrogen atoms can be syn or anti with respect to each other and thus show geometrical isomerism.

Compound 2 - the double bond is not causing the isomerism. (Discussed in compound 1) Here there is only one sp3 hybridized carbon(not attached with double bond) so it is lacking one group with which it could've made isomerism.

Compound 3- Here you are correct. the CH3 groups and H attached can show syn and anti so it will show geometrical isomerism

Not the answer you're looking for? Browse other questions tagged organic-chemistry geometrical-isomerism or ask your own question.

2
Which of the these SN1 solvolysis of two alkenyl bromides reactions is faster?
10
Number of stereoisomers of a polyene
4
Does 3,6-di-X-cyclohexa-1,4-diene have stereo centers?
3
How many stereoisomers are possible for 1,2-dimethyl-4-(propan-2-ylidene)cyclopentane?
0
Trans vs. cis, or Z vs. E
3
Chiral centres with stereoisomeric substituents