My book says that a pair of enantiomers will react the same way with an achiral substance.

How is this possible? Does this imply that the product is achiral, even though the enantiomers are chiral? If so, why?

The key here is to look at the transition state through which the reaction proceeds.

The long answer is, unfortunately, convoluted by the fact that a new bond may be formed in the transition state, creating a stereogenic center. In other words, you might have something like:

These are diastereomeric and the rates through these two transition states is different.

But $\ce{($R$)-A}$ does the exact same thing. So the rate of reactivity is controlled via 4 transition states:

So, we can safely conclude that indeed enantiomeric reactants react at the same rate with achiral reagents.

Enantiomers have the same chemical and physical properties (save their optical activity) and will undergo the same reaction with an achiral substrate to form a new pair of enantiomers. To separate them, you need a chiral substrate which will form a diastereomeric product. Diastereomers have unique chemical and physical properties, facilitating their separation.

My teacher gave me the analogy of shaking someones hand. If you shake someone’s hand with a pole (an achiral object) you can’t identify which hand they used, but you will immediately be able to when you use your hand (another chiral object).

It's possible for them to react the same way because the enantiomers have the same chemical and physical properties and the achiral substance doesn't care whether it is reacting with a left handed enantiomer or a right handed enantiomer. It does not imply that the product is achiral because the reaction could disrupt what made them chiral in the first place, or it could preserve what made them chiral, it depends on the reaction.

Whether or not the products are chiral depends on what you react. If you react lactic acid with, say, methanol to form an ester, then the lactate group is still chiral; if you instead burn it in oxygen, you just get carbon dioxide and water, which are both achiral.

1. The reaction products may or may not be chiral. 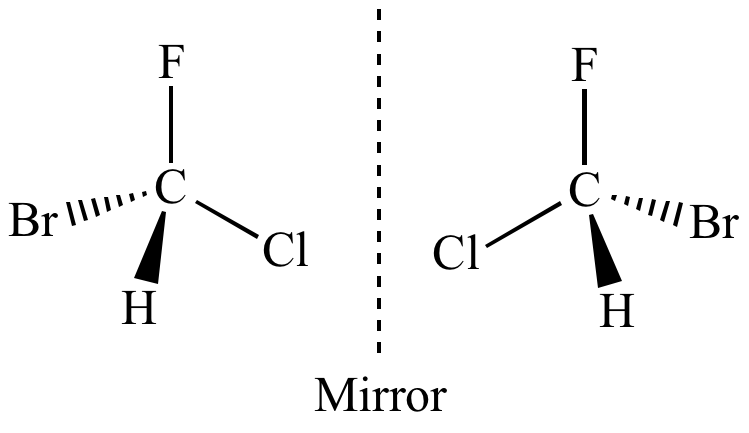 and imagine that they react with some two achiral reactants $R_1$ and $R_2$, such that:

(The actual mechanisms may not be too realistic - I'm a physicist and not a chemist ;-). But the principles hold.)

As you can see, the reaction products can remain chiral (which is the nontrivial property). But there is also the possibility that the chirality can be destroyed in the reaction.

2. The reaction rate itself is the same.

This is likely what your book means when it says 'a pair of enantiomers will react the same way with an achiral substance'.

If you go back to the two examples above, the reactant itself doesn't care which enantiomer it's interacting with: it just sees a CH bond and does stuff with it, and it doesn't much care about which way the halogens are arranged on the other side of that carbon.

In a more complicated molecule, the reaction may indeed 'bounce off' of the other parts of the chiral center, or have an even more complex interaction with the rest of the molecule. However, for every reaction pathway in the S enantiomer, there will be an equal-but-mirror-image reaction pathway with the R enantiomer, and both will be dynamically equivalent, so the reaction rates must be the same. (If the other reactant is itself chiral, on the other hand, that's no longer true, and the reaction rates and products can come out completely different.)

Not the answer you're looking for? Browse other questions tagged organic-chemistry stereochemistry isomers chirality or ask your own question.

1
Separating Enantiomers
4
Is rotation of a mirror image allowed in order to determine chirality? Doesn't rotation alter the mirror image of the molecule?
4
Are alkenes with bulky groups attached (like the one shown in the picture) chiral or achiral?
0
Monochlorination of 2-chloropentane and possible enantiomer products
6
How is the cavity of a cyclodextrin chiral?
4
Can a molecule be achiral whilst it's resonance form chiral?
3
Is the existence of chirality center equivalent to chiral?