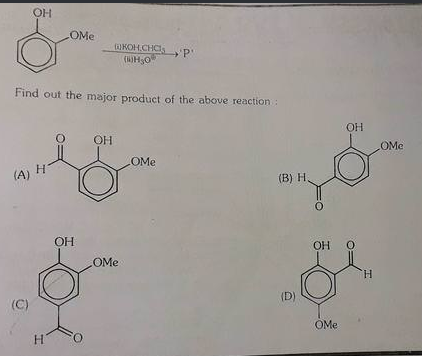 This is Reimer-Tiemann Carbonylation reaction in which the ortho product is major when phenol is the substrate. Hence, here I expected the ortho product to be major as well as it would also make hydrogen bonding possible, which stabilizes the compound. Besides, $\ce{-OH}$ is a better activator than $\ce{-OCH3}$.

But the answer given in the module is $C$ and not $A$. Where is my thought process wrong?

The product of the Reimer-Tiemann reaction actually also depends on the counter cation of the base we use. It is found that if we use $\ce{NaOH}$ as the base used for formation of carbene electrophile, ortho product is major. But surprisingly, if we use the base $\ce{KOH}$, the para product is produced in major amount.
The reason behind this is the stability of the transition state via formation of an ordered cyclic arrangement.Due to the smaller size of $\ce{Na+}$, this can get fit between the Oxygen and Chlorine atom in ortho positioned electrophile via electrostatic attraction and give rise to a very ordered transition state which governs the major formation ortho product. See for details, https://chemistry.stackexchange.com/a/98197/58497
On the other hand, $\ce{K+}$ is huge in size related to $\ce{Na+}$, which obviously can't increase the stability of the ortho product by forming a cyclic orderd Transition state. That's why, the para product generally gets preference in the case of $\ce{KOH}$.

You are right in that the $\ce{OH}$ is the main director, especially in alkaline media.

The para position is preferred over ortho because it has less sterical hindrance. Therefore, the major product will de C.

In the case of phenol, there are two ortho positions and therefore there is more ortho than para substitution.

If it were a Kolbe-Schmidt reaction, instead of Riemer-Tiemann, that is, the reaction of sodium or potassium phenoxide with carbon dioxide, there is an interaction between the cation and the reagents. In the case of sodium, although the mechanism is not clearly understood, there is an interaction between the sodium cation and the oxygen in carbon dioxide. Therefore, and because the reaction is performed without solvent, the carbon dioxide goes to the ortho position. When potassium is used instead, there is evidence that the complex is between the aromatic compound and the carbon atom of $\ce{CO2}$.

In the case of the Riemer-Tiemann reaction, dichlorocarbene is formed in aqueous solution. In solution, the sodium and phenoxide ions are separated and hydrated, because both are perfectly stable. Therefore, the formation of a complex is very unfavorable, and its ortho directing effect negligible. Besides, a complex between an alkaline cation and a covalent chlorine atom seems still more problematic, especially in aqueous solution. The only complexes of alkaline cations with organics, of which I am aware, are the crown ethers, which is, of course, a completely different case.

17
Rearrangement of a bicyclic dienone under acidic conditions
7
Which is the major product formed on nitration of benzyl methyl ether?
2
Reactivity comparison of phenol and toluene towards electrophilic substitution
1
Why does Oxygen act as Nucleophile over here?
7
Proton removal during benzyne formation in substituted haloarenes
3
Predicting product ratio by rearrangement in Dehydration Reactions
3
Major product formed in Reimer-Tiemann reaction when Potassium Hydroxide is used as a base