I'm somewhat confused by the concept of Wyckoff positions in crystal structures. From Quantum Chemistry of Solids by Robert Evarestov, the definition of a Wyckoff position is "all the crystallographic orbits which have the same (not only isomorphic, but the same) site-symmetry group". I was okay with this, but he then went on to define equivalent Wyckoff positions as positions such that "equivalent sites have the same point-group symmetry and the same orientations of symmetry elements with respect to the lattice".

Pairs of Wyckoff positions a-b, f-g, and i-j have isomorphic site-symmetry groups ($D_{2h},C_{2v},\text{ and } C_s$ respectively). As is seen from the table, the pairs of points a-b and f-g not only have isomorphic, but also equivalent Wyckoff positions. The equivalent sites have the same point group symmetry and the same orientations of symmetry elements with respect to the lattice. 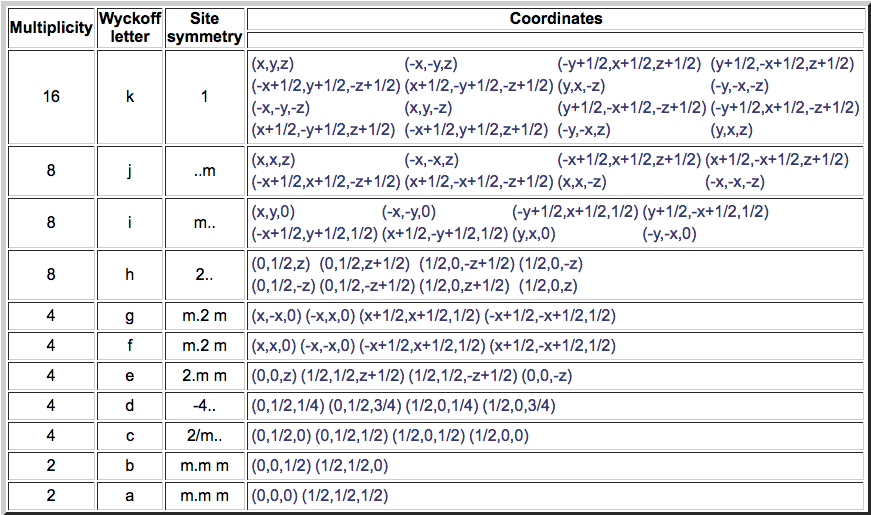 It seems to me that care has to be taken with the words 'equivalent' and 'same' in the definitions above. Equivalent positions do not mean the same position. In the case, say, of a 4 fold axis any point say in the first quadrant can be replicated to the other three quadrants and these are equivalent points but not the same point, clearly. In some cases such as with reflections in a plane, two sets of identical (or equivalent) points may be produced and so and the number of equivalent points is reduced. The number of equivalent sets is called the multiplicity. These have been called special positions when they lie on a symmetry element

In the Wycoff notation equivalent positions are labelled consecutively $a, b, c\cdots$ starting with $a$ for the highest symmetry. A position 2f, for example, indicates two equivalent atoms at position given by symmetry f. For each space group a table of general and special positions can be made. This includes point symmetries, positions multiplicities and Wycoff symbols. The table below shows examples. 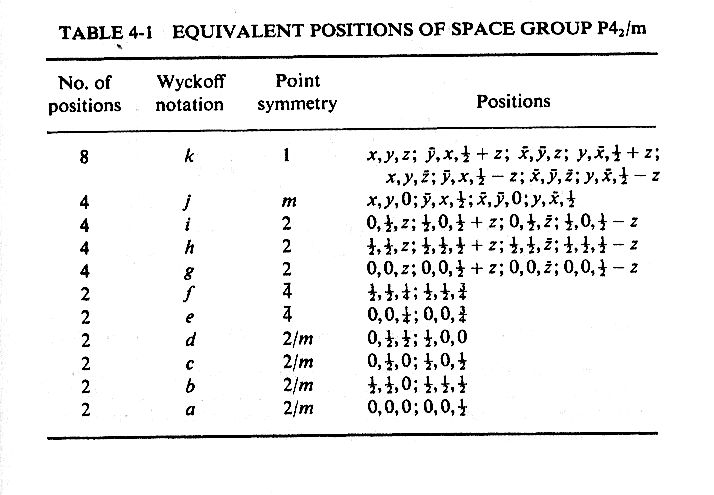 Table copied from page 75 of 'Introduction to Crystallography' by D. Sands, publ. Dover

I believe I have identified what my misunderstanding was. I was incorrectly conflating point group symmetry with site symmetry, which is a subgroup of the overall point group symmetry that leaves the given position unchanged. So, it is possible for two points to have equivalent site symmetries while not having the same site symmetry, e.g the points might both have mirror plane symmetry, but not the same mirror plane. The orbits from these generating points would not be conjugate and so they would be put into separate Wyckoff positions. However, depending on where you choose the origin to be, the different Wyckoff positions can interchange the generating points of their orbits, making them equivalent positions.

An explicit example of this is Rock salt NaCl (space group N225), where either Na or Cl can placed at Wyckoff position a while the other is placed at b. Formally, equivalent Wyckoff positions are those which can be transformed into each other by applying the generators of the Euclidean normalizer. I recently found Symmetry Relations between Crystal Structures by Ulrich Müeller and it has been very helpful in clarifying my understanding of space groups.

Not the answer you're looking for? Browse other questions tagged crystal-structure terminology solid-state-chemistry group-theory or ask your own question.

4
Basic Understanding of Relative Atomic Mass
0
Is there an equivalent unit cell that can describe a bcc unit cell where all points are the same element?
5
Vibronic coupling: How do I determine the new point group after vibration?